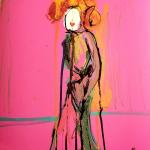 The geisha, a Japanese woman who entertains and act as hostess to (mostly) men. The courtesan, originally a courtier which means a person who attends the court of a powerful person, typically a monarch. Both are scrutinized for their actions, their appearance and demeanor. Often, performing to gain, knowledge or amusement and elevate their status. The higher they climb, the more elaborate their outward appearance. Cunning and gumption juxtaposed with sadness and loneliness never truly revealing who they truly are. These ladies are done with out faces as who they are doesn’t make a difference, it is what they do and marks them and defines them. They are merely actors on the stage. For if they were to reveal themselves, they would not be actors but, a person…with a face, naked, and, genuine.

Buy it
Chat with the artist.
Message
Add to Wishlist

Try-before-you-buy with a 3 month rental. 100% of your rental payments go towards the purchase (interest free). Message the artist directly, and start the conversation.

We make it easy for you to try art with smart payment plans and try-before-you-buy models.

See How It Works

Artwork protection is included on all art rentals up to $5K. Our Customer Care team is always here to help.

1% from every transaction goes towards SKETCH WORKING ARTS.